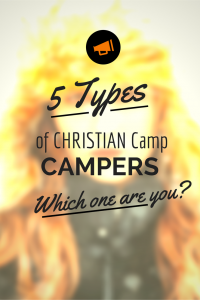 Ahh, Christian Camp. Fun times with friends, fishing on the lake, playing games, and Bible time in the chapel. Christian camp and church retreats are always (well, usually) a good time. The people that attend these events are usually Christians, and you’ll either be friends with them, meet them and never talk to them again, or pretty much despise them. Hey, you can’t be expected to get along with everybody, right? There are many different types of people who attend Christian camp and church retreats. Let’s explore them, shall we?

The PKs (or close to it)

The first type would be the kids who grew up in Christian households, maybe the Pastor’s kids (PK), and they’re generally nice to everyone. Although knowledgeable, they never try to throw their Bible smarts in anybody’s face. They aren’t the kid that’s all, “So, Sarah – How did Saul of Tarsus become known as Paul?” to try and test your Bibleology, hoping all the while you won’t have the slightest clue as to how to answer. Yeah, I’m talking about that guy. You know the one, the other kind of kid that attends Bible Camp.

The other kid is the one who, as stated above, comes in like he owns the place. Has always walks around with a smug look on his face, has his little group of followers, and dresses too cool for school. He’s the kid most people look up to for absolutely no reason whatsoever, aside from the fact that his popularity is something they desire for themselves. Although, nobody can quite figure out why he’s so popular in the first place…I mean, what has he done to gain this stature in the first place? He’s the one that comes from the family with money, and you only know this because he brags about it all the time. He’s the one who quizzes you on your Bible knowledge and if you’re wrong, points, laughs, and makes it a point to correct you in front of everyone. He’s also the guy that’s pretty much better than you at absolutely everything. Yeah…that guy. Ugh, I know.

Then, you have the quiet group who sort of just stays to themselves. They never really associate with anyone, not even their own little clique, but they flock together. You never see them talking, they’re just kind of… there. I suppose this group never really had a say in the first place about going, because their parents just decided to send them to get some, ‘interaction with other kids their age’, yet they talk to absolutely no one. (You’re wasting your money, mom and dad). These kids are the ones that you need to watch out for. The quiet ones. The quiet ones always tend to kick everyone’s butts at the sports and teamwork building events despite their lack of social skill. +1 for the shy girl in the gym shirt and nerd with glasses. Yes, I’m talking to you. It’s your moment. Shine!

Then, you have the girls who never stop smiling and trying to make everyone’s day better. They’re bubbly, happy, excited, and bouncy- and nothing, ever – not even if Justin Beiber were to retire from singing forever – could get them down. They’re always there to give a word of encouragement, a hug, and a squeal when something goes good for someone. They cheer everyone on, and make the drab times go by a little quicker. They’re the ones you’ll see the quiet ones staring at with crossed arms, thinking, ‘Really?’ in the back of their mind, and who the too-cool-for-school kid tries to ‘holla’ at. Some people can’t stand them because they’re so darn happy all the time. (Really, can you blame the haters? Happy Happy Happy…it’s enough to make you sick!) Others love their positive energy. Either way, they always manage to make a lasting impression. These ones too tend to come in flocks. I like to call this group the Christian Camp Cheerleaders.

Next, you have the camp counselors. Most of the time they are very helpful, happy, and willing to teach and even learn. Sometimes, though, you can just tell by looking at them that they have absolutely no life outside of being a counselor. Like, none, whatsoever. From the way they wear their ridiculous tube socks, to the lack of hygiene, or maybe even the corny jokes they might tell. They are the ones who own rock collections, and dribble food all over their shirts when they eat. Regardless, everyone seems to love them. (Maybe some deodorant wouldn’t hurt, though. I’m just saying!)

Despite the different types of people who attend Christian camp, or church retreats, it really is always a good time, because the different personalities are what make Christian camp special, unique, and fun. There will be memories made to last a lifetime, great team-building and leadership skills learned, and lasting friendships and bonds that will endure the test of time. Then, there will always be the people you tried to like, but just couldn’t stand. That’s okay though, because at the end of the day, they give you something to tell a story about. And life is all about having a story to tell.

*This is a guest article from community member Sarah M.