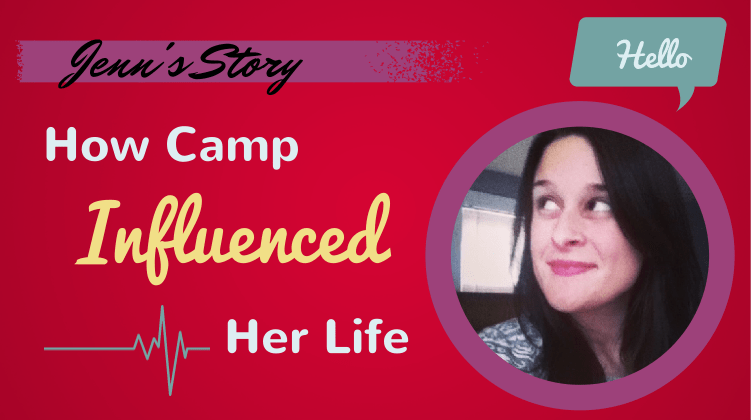 When parents ask me if their kids should attend church camp, I will always emphatically say yes! I can honestly say that God worked through camp to change the course of my life.

Without the Christian camp I attended, I would likely have never heard of the college I ended up attending, met the girls who became my best friends, fell in love with the man who would become my husband, and ultimately end up with such an intimate relationship with God.

Rewind back to my first summer in the South, after moving from New England, to a branch of the same church, but not knowing anyone. What was the first thing my parents did?

They dropped me off at camp for a week. I was terrified. I didn’t know anyone. What could possibly make them think this was a good idea?

One week later, they took me home, and I was overjoyed at the friends and memories I’d made. It took all of one night for me to make friends with my cabin-mates, and by the end of the week I couldn’t wait until the next year.

Sure, there were all the typical camp activities – dodgeball, swimming, arts and crafts. And the not-so-typical – shaving cream fights and practical jokes called “raids”. But the thing that moved me the most was that, even from my first year of camp as an 11-year-old, I could see God more clearly at camp than anywhere else.

I was amazed at how a cabin of different people from different places could be so closely bonded by the end of the week, and how we kept in touch with each other even years after camp. The counselors and directors consistently inspired me with their joy, faith, and devotion. And there’s no better place to see God than surrounded by his creation.

For over 10 years, I went back to the same camp – attending both our pre-teen and teen camps, both as a camper, and later as a counselor and an activities director. I went for multiple weeks in the same summer and came home exhausted and voiceless, but happy.

It’s not a vacation. You are absolutely pushed to the limit as a counselor – going to bed late, waking up early, eating last, being the one to motivate and inspire, being a big brother or sister to a child missing their family.

It was definitely humbling, but it taught me exactly why Jesus says that we should be “the very last, and the servant of all” (Mark 9:35).

Camp was life-altering in the paths that God set before me as well. Some of my best friends were made at camp, one of whom convinced me to visit a college I’d never heard of, which ended up becoming the school I attended.

That same friend eventually set me up with my husband-to-be. Moreover, I ended up choosing to become a disciple of Christ when I was young, and I truly believe camp had a huge impact on that.

Obviously, I can’t guarantee the same kind of things will happen to everyone. But I can’t share my love of camp enough. If you have an opportunity to send your kids to camp, but aren’t sure; or if you are considering a job at a camp for a summer, let me be the one to tell you to go for it!

I loved every moment spent and memory made at camp, and in return, it helped to form the kind of person I ended up becoming.

This is a guest post submitted by Jenn from the “What You Make It” blog. Jenn is a Christian woman and event planner who writes about her imperfect walk with God, adventures with her husband, life, photography, travel, food, fashion, decor, and planning events. Learn more about Jenn at www.whatyoumakeitblog.com.